Tony waited too late to make restaurant reservations for Valentine's Day so he decided we should fly somewhere. Our friends, Amanda and Chet were game to tag along.  Since they are both gainfully employed, we tailored our travel days around their schedules, planning to leave Atlanta on Wednesday and return on Monday.  We let the days dictate the destination because, as we always say when traveling standby, "You can pick where you go, or you can pick when you go, but you cannot pick both." So...  The destinations open to us, in order of departure times were:  Brussels, Amsterdam and London.  Brussels was our first choice and thankfully, we were able to get good seats without much nail-biting.

Dinner, a movie and a nap, and we landed in Brussels.  The train to Antwerp was very reasonable at €44 for the four of us.  We got a direct train and were in Antwerp well before noon.  We took a few minutes to admire the beautiful train station before heading to our hotel. 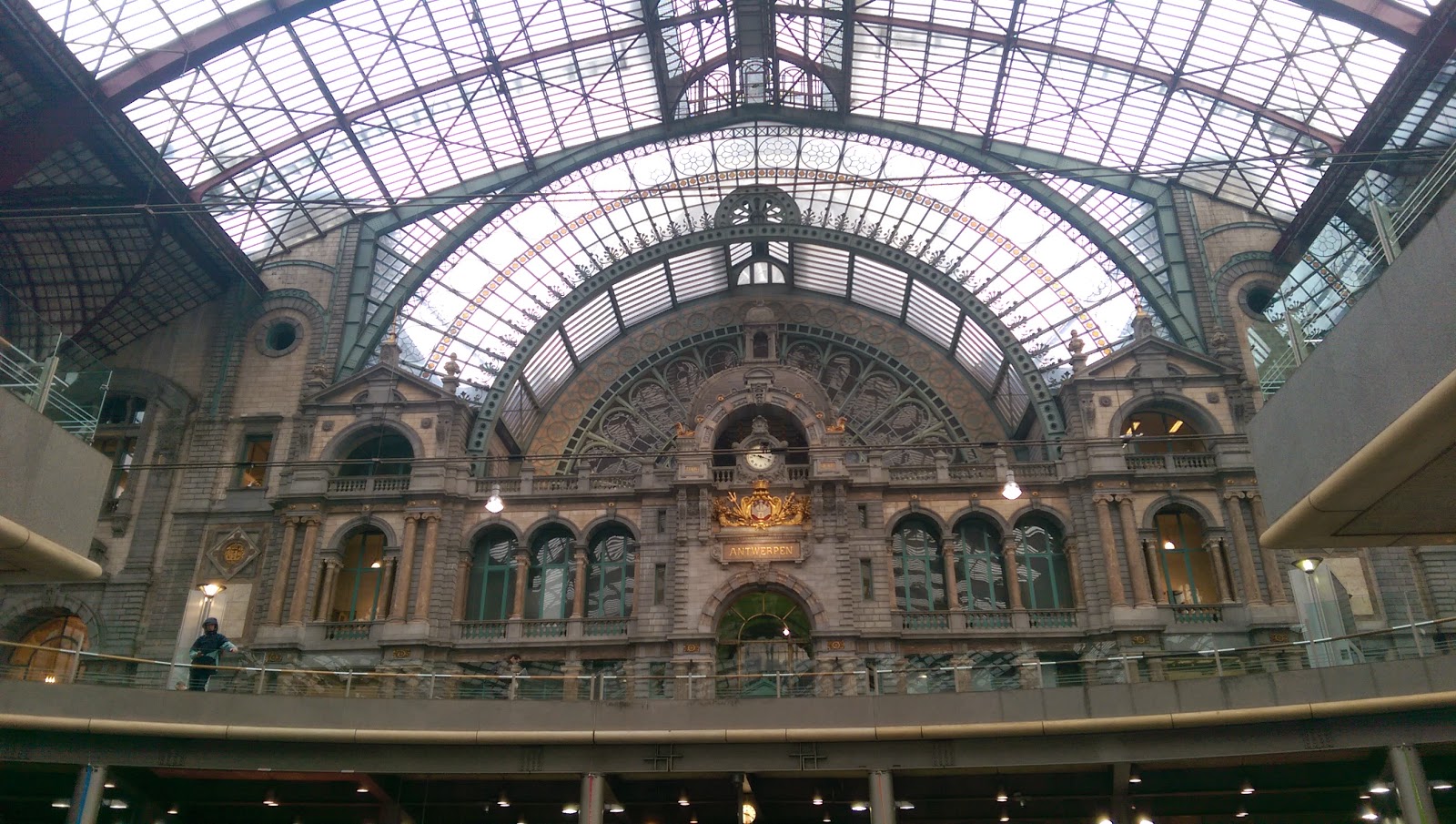 We really like staying at the Antwerp Hilton, but when we checked, the rate was rather high so we sought alternatives.  We looked on airbnb and found a few interesting possibilities but nothing would work out for our dates of travel, so we booked a room at the IBIS Antwerpen Centrum with a 4PM cancellation policy.  We picked up a map at the TI and walked the 10 minutes to our hotel.  We knew that the IBIS would be roughly comparable to a Holiday Inn, but we were unprepared for just how small the bathroom would be!  We joked that the bathroom on the plane was larger.  The view from our room was of the construction site next door, but we didn't care because we didn't plan to spend much time in the room. 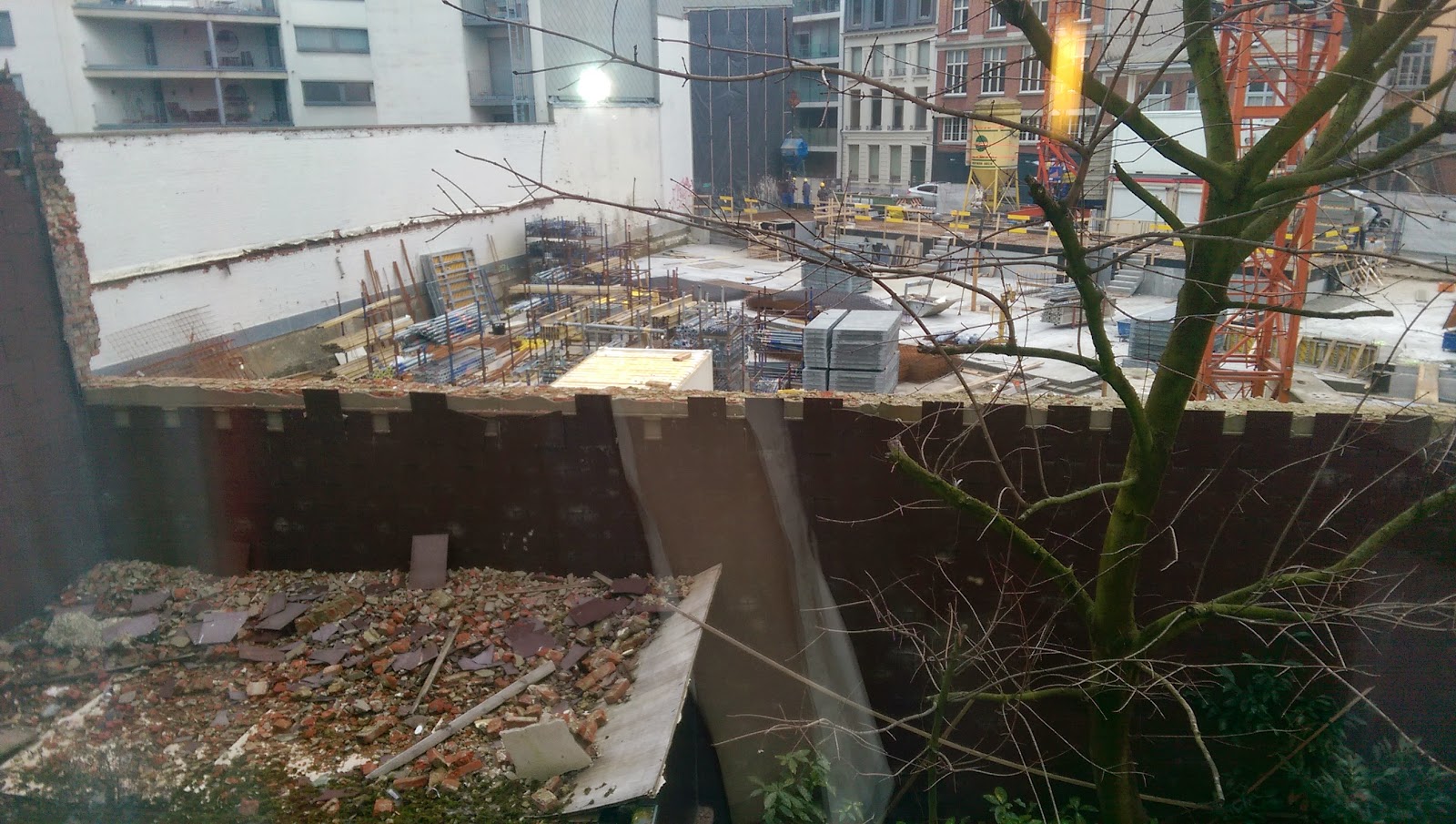 We took a few minutes to freshen up and then set out to explore the town.  We did some sightseeing and a little shopping. 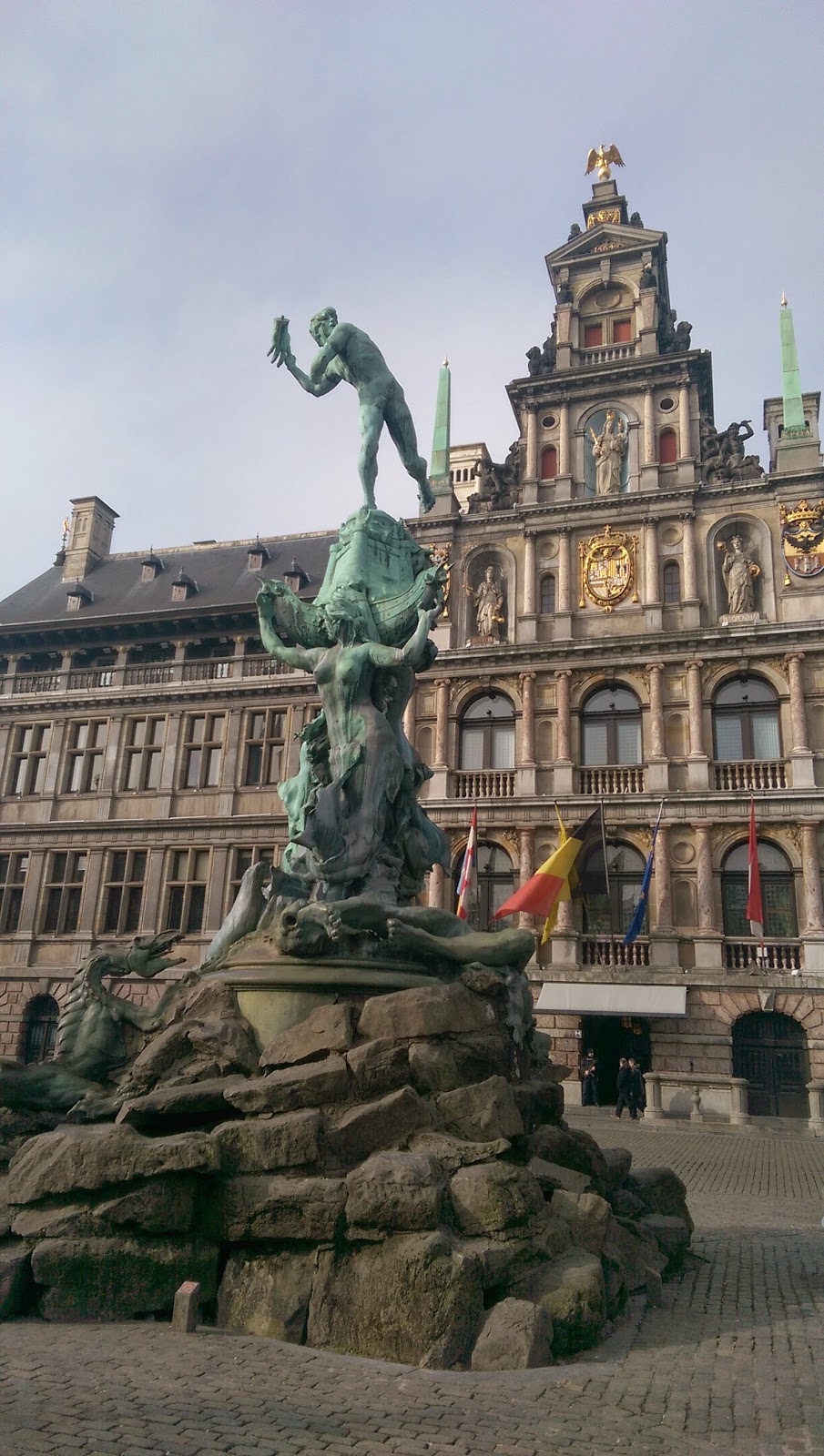 We tried a few of the renowned Belgium beers.  We particularly liked the Gollum bar that had 30 different beers on tap!

We found a restaurant very near our hotel that got great reviews on Yelp.  The Gazette had no tables available but we elbowed our way to the bar and found a nice corner where we could sit and enjoy our meals.  The menu was not available in English but the wait staff made some recommendations of traditional Belgian meals.

The following day, we had an amazing breakfast/brunch at another Yelp suggestion called 't Koekebakske.  The Greek Omelet was fabulous! 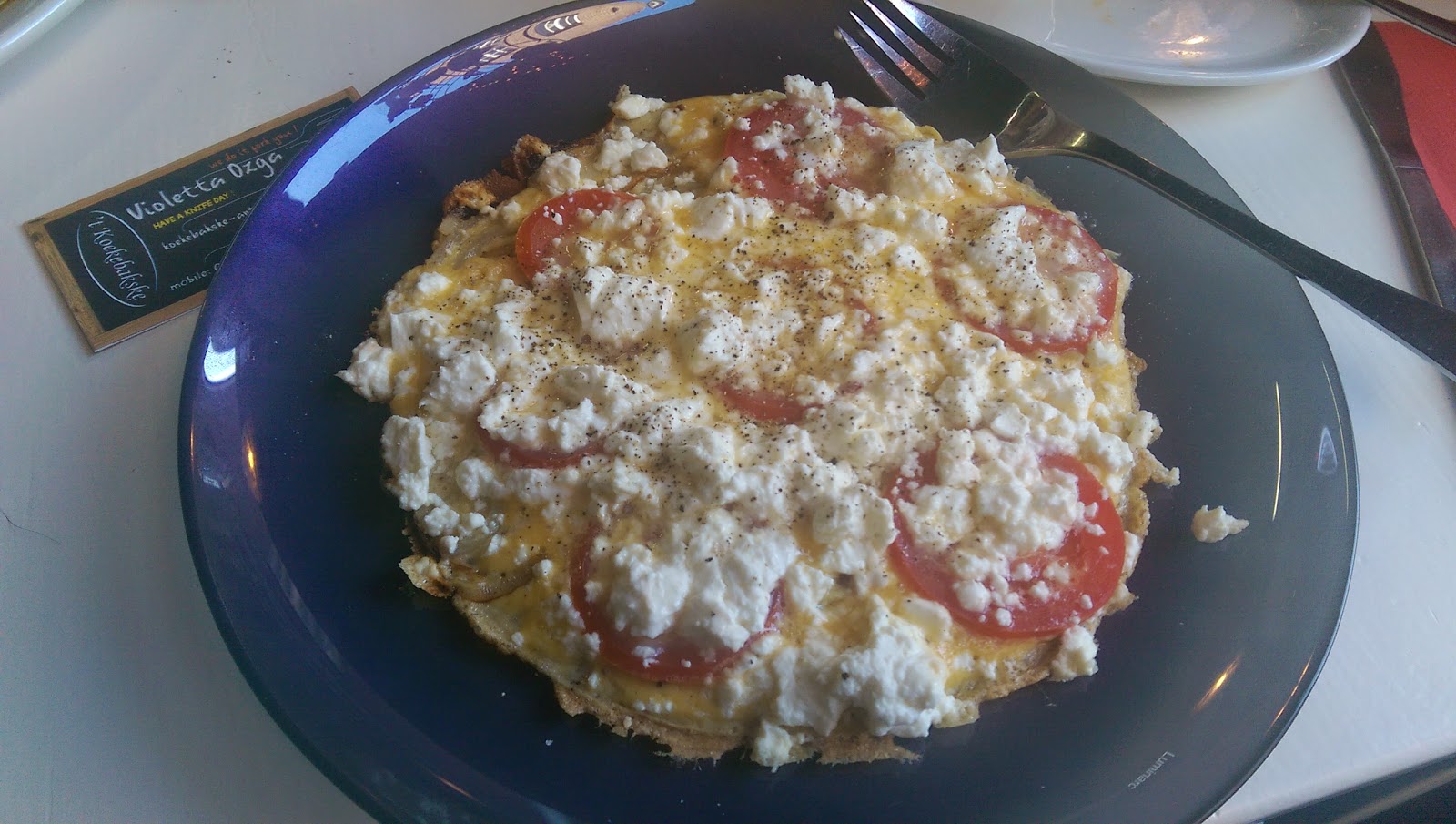 Tony had seen a tunnel under the river on the map so we set out to find it.  The entrance was in a building that housed a set of old wooden escalators taking us deep below the river. 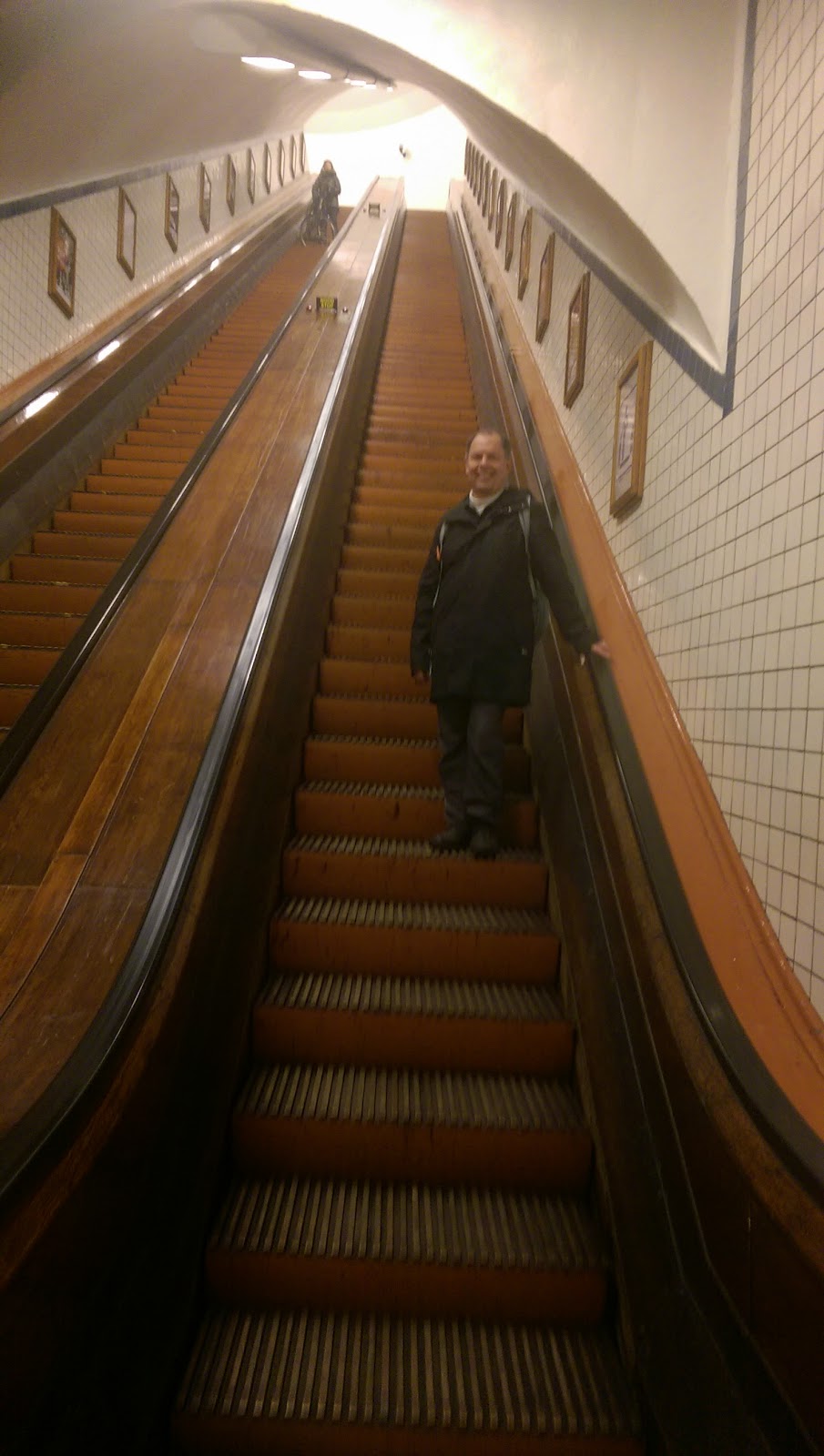 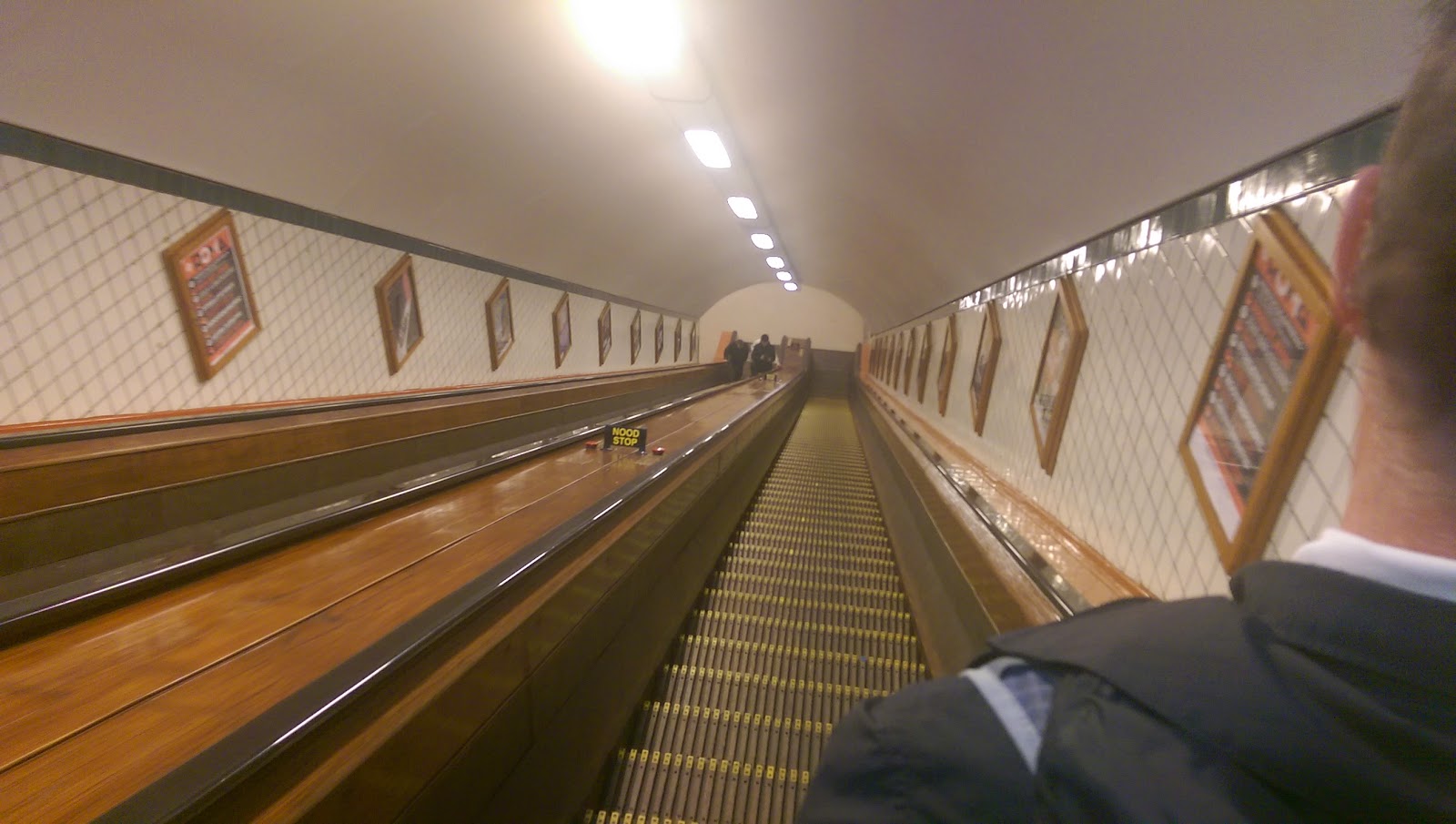 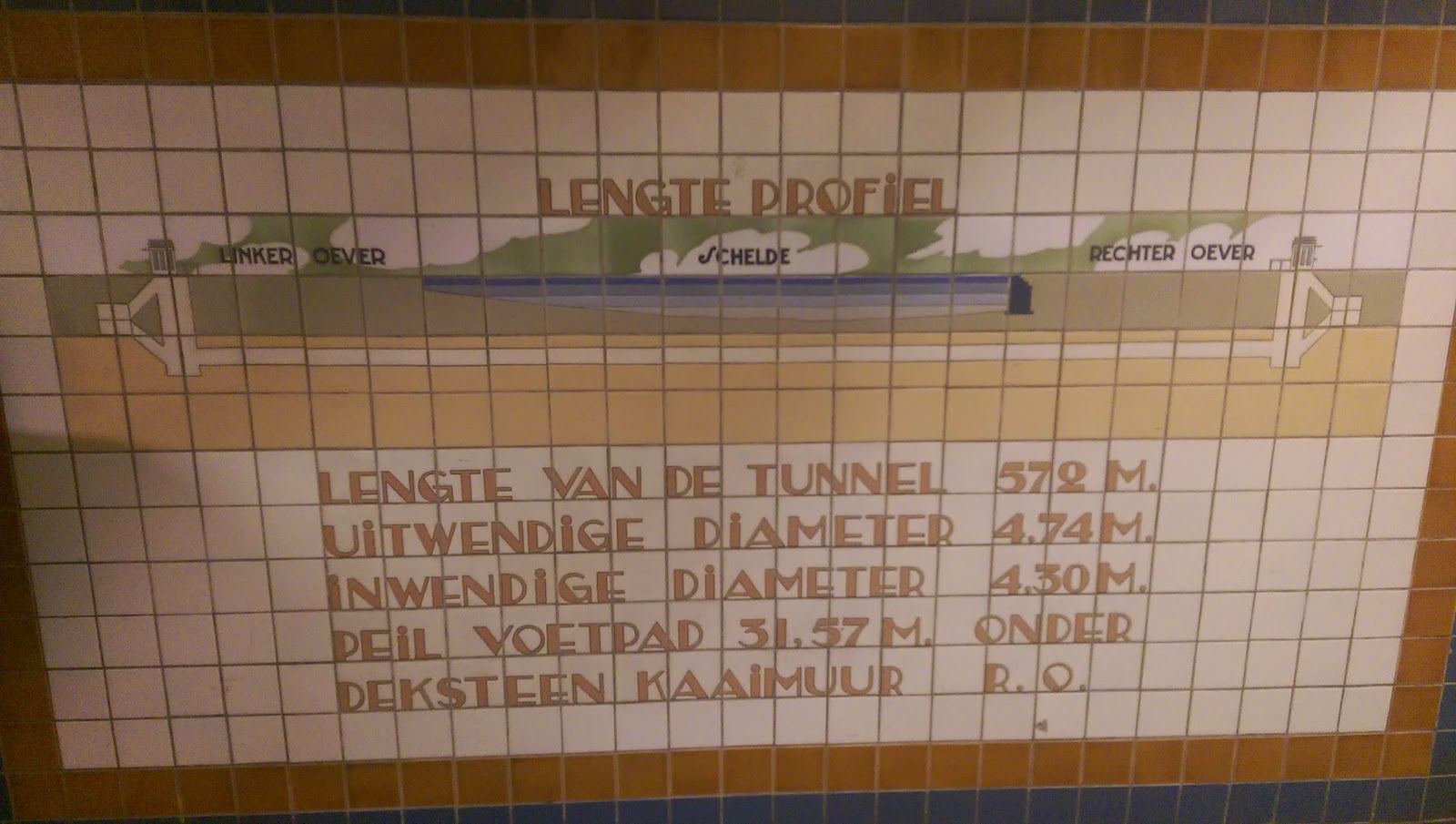 It was a little scary, knowing we were actually under the river!  I kept looking for leaks. 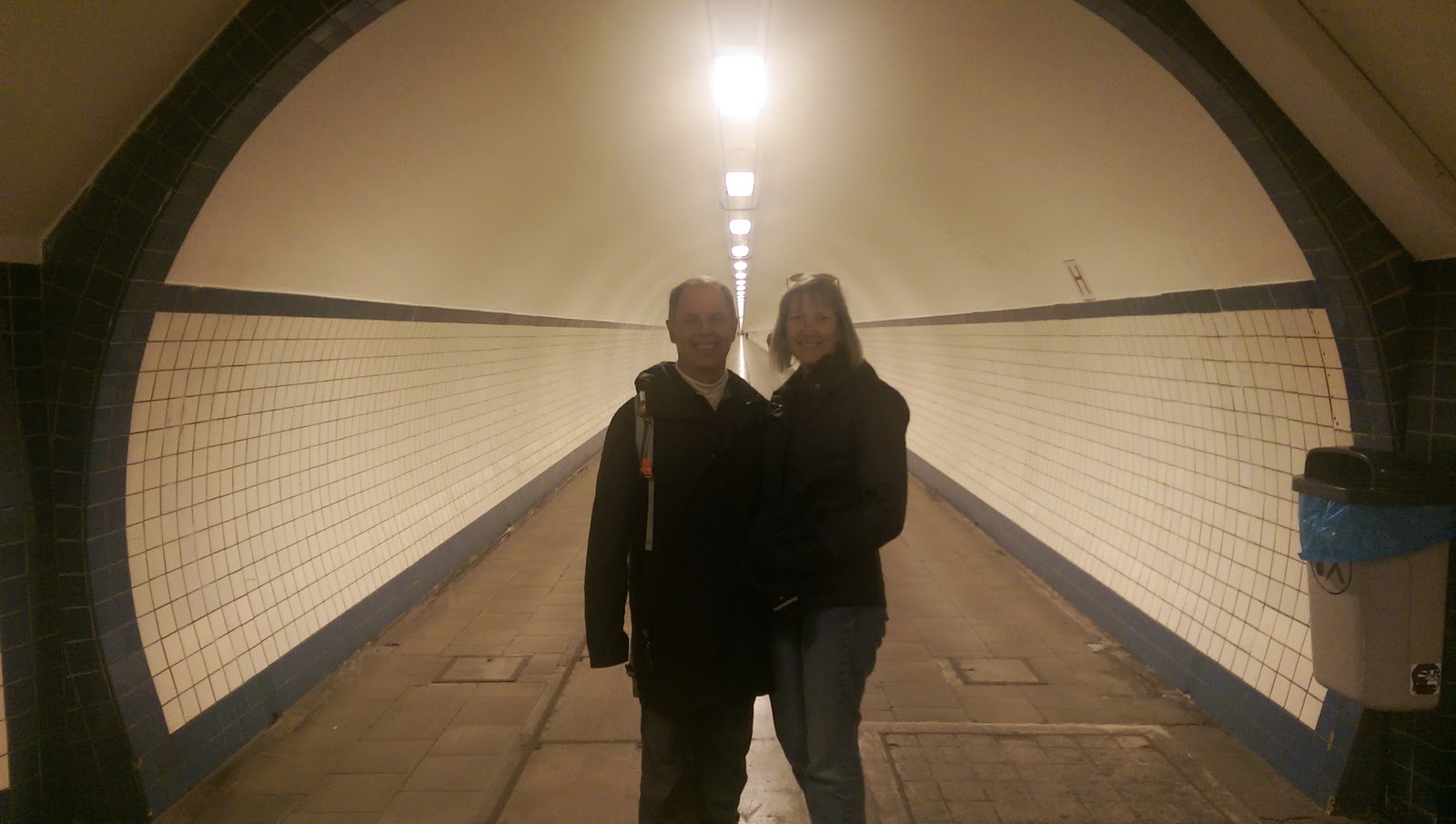 On the other side of the river, we had a great panoramic view of Antwerp.

There was a really nice walking/bike path next to the river and we ran into some ladies who recommended an area with restaurants a 15 minute walk away.  We determined that they must be athletes because it was more than a 15 minute walk for us. Aside from a couple of restaurants, this side of the river seemed to be mostly residential.

Back on the Antwerp side, we did a little shopping and stopped into a very unfriendly bar called 't Half Souke where we were made to feel very unwelcome!  We got the cold shoulder from the bartendress and the patrons until they decided we were not British and then they warmed up to us.  The floor in this place was extremely uneven.  It looked like there were a couple of 1 foot ocean waves on the floor.  It was a great people watching spot though.

Dinner was at Patine Wijnbistro, another Yelp suggestion.  We weren't terribly hungry after our huge breakfast, so we settled for soup and salad. The house wine was very good and inexpensive!

We met up with our friend Liesbeth when she got off from work at a great little bar called Twilight, near our hotel.  The bar caters mostly to gay male clients but they were very friendly to us. We sat outside and made friends with several other folks who wanted to share our table.  One couple had even gotten engaged that night!  (She's holding a sign that says "Diamond voucher for the most wonderful woman in the world" with a picture of a ring.  Underneath it says, "Come and get me!") 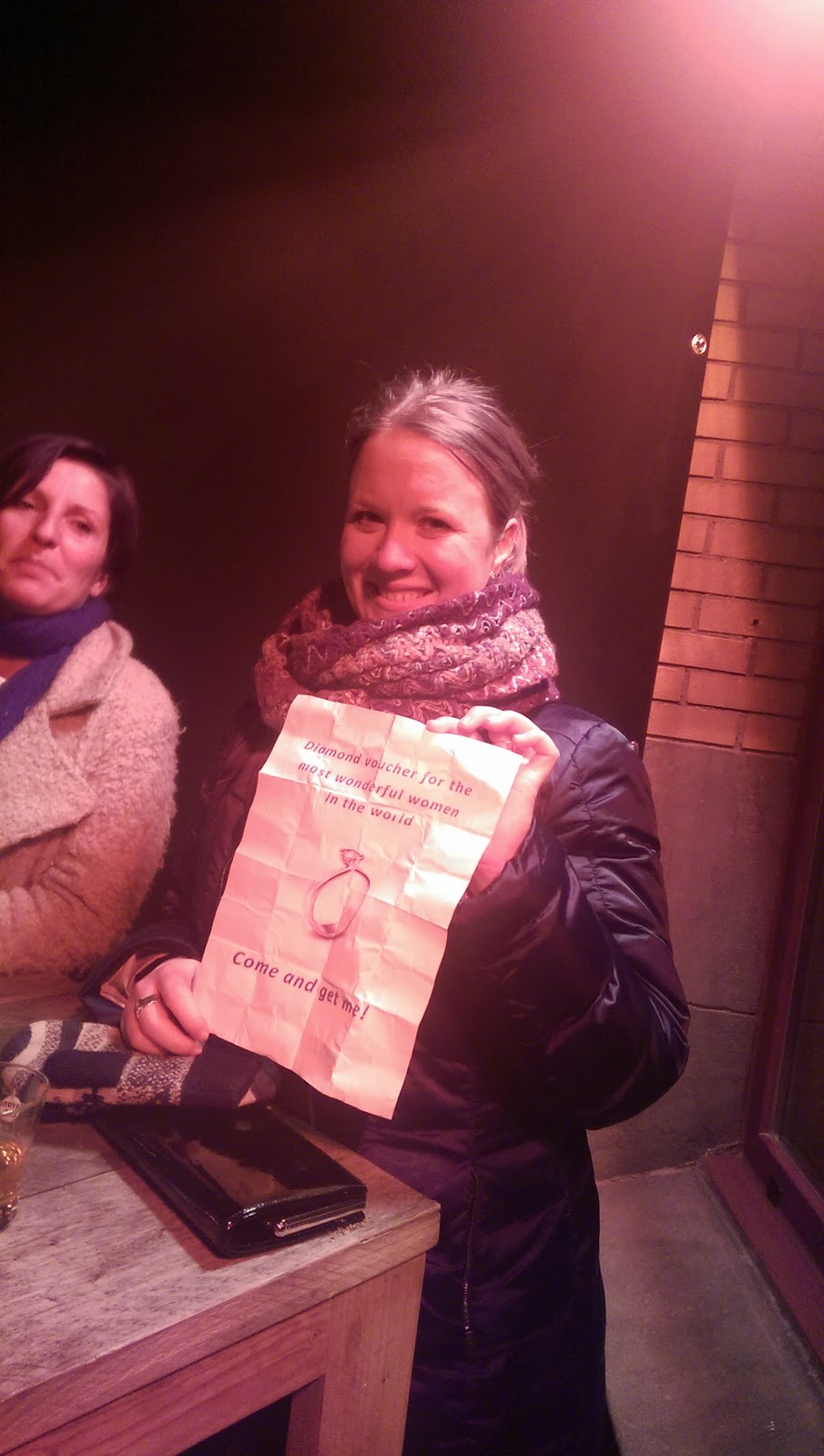 On Valentine's Day, our friends took the train to Brugge, but we decided to have a quiet day in Antwerp.  There was a great market outside our hotel where people were buying fresh fruits, meats and cheeses.  There were several booths selling mussels and champagne as well. 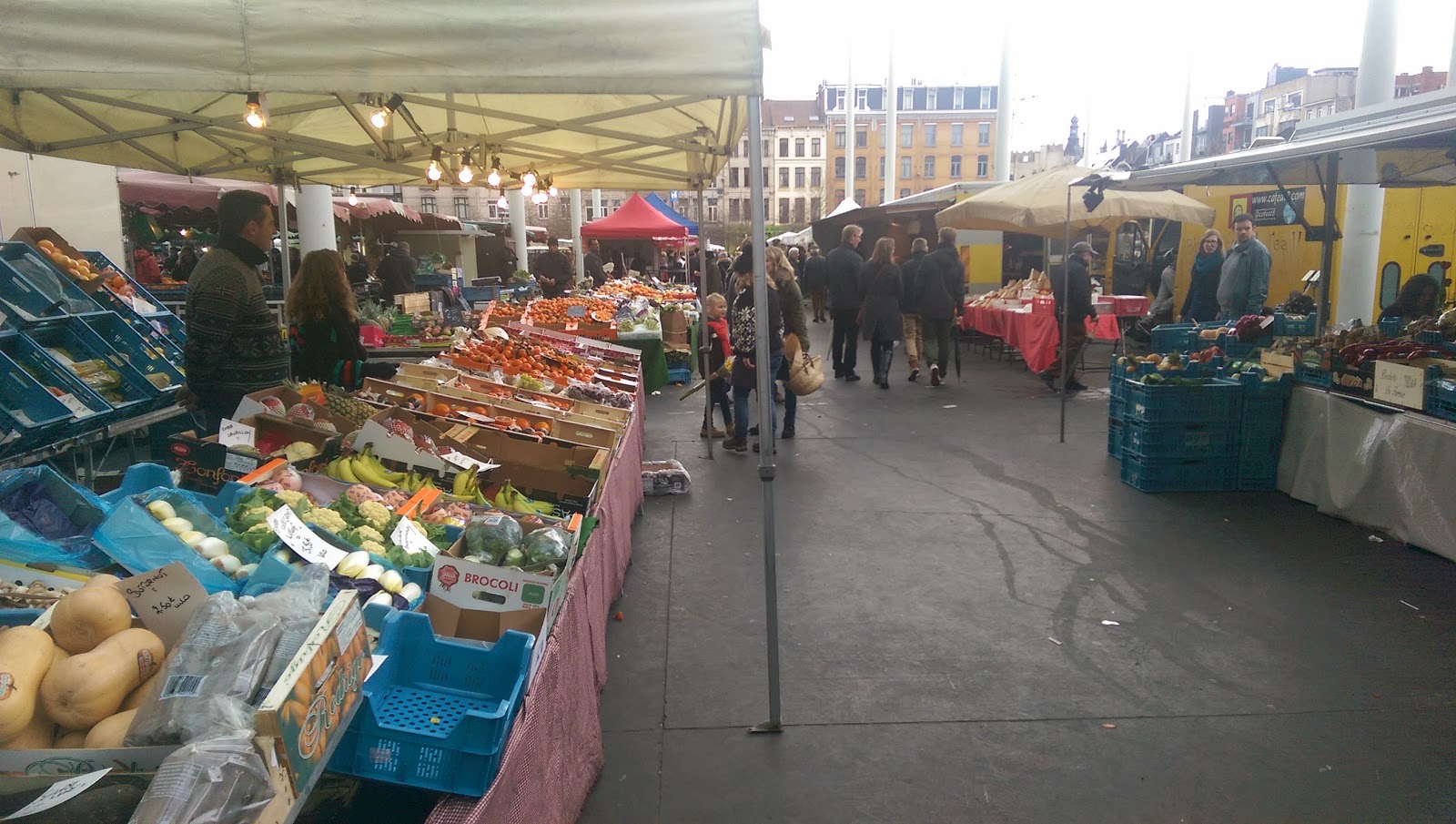 We found a table near a window at Paters Vaetje next to the Cathedral and spent most of the afternoon playing cards and people watching. 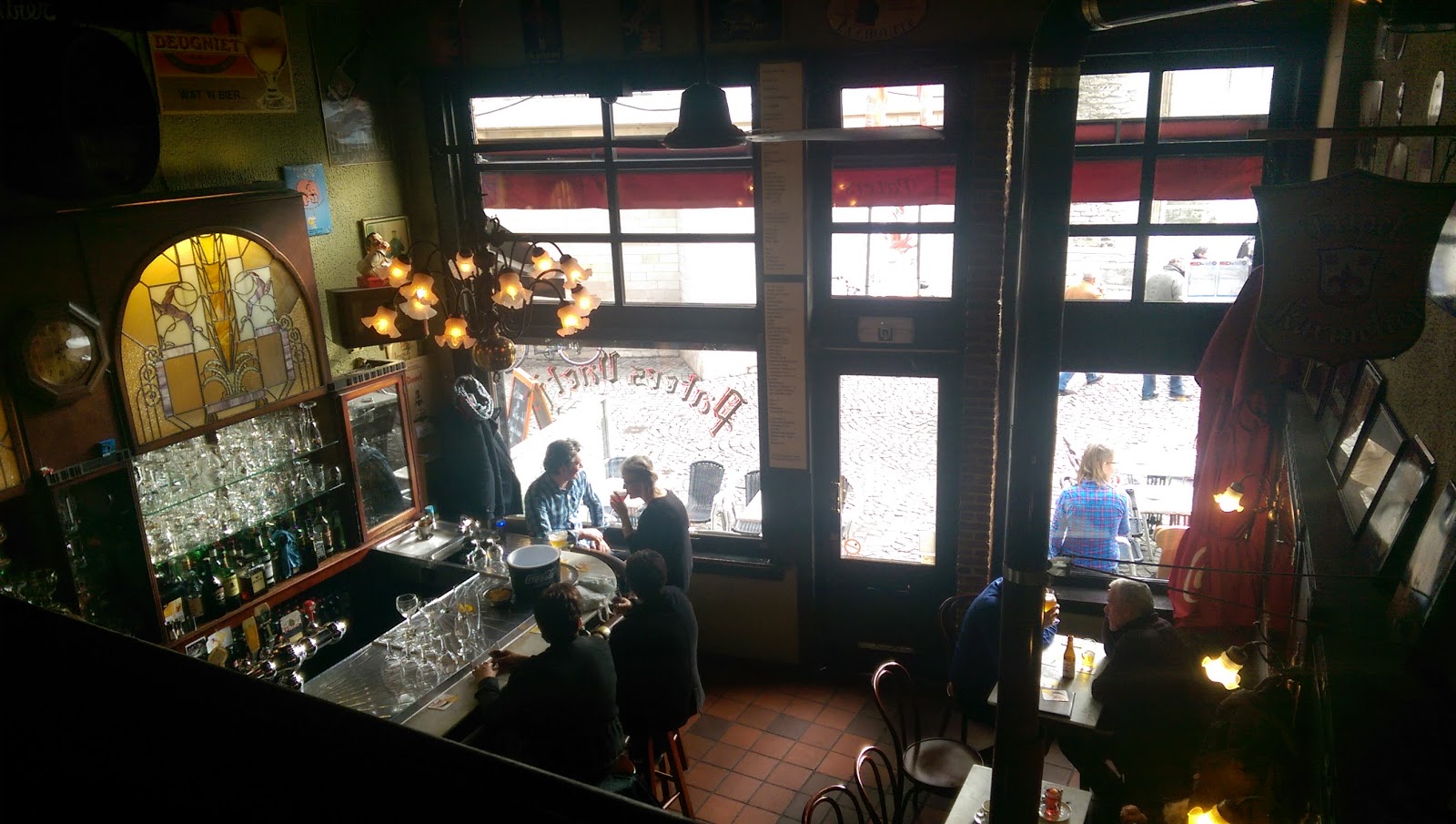 We walked around a bit and stopped into a cute little place called De Herk tucked away in an alley.  We had a glass of wine and contemplating asking if they tables available for dinner but after checking Yelp and Trip Advisor and decided against it.

When our friends got back from Brugge, we went in search of a restaurant for dinner.  We knew it would be difficult since it was Valentine's Day.  We passed a number of restaurants on Oud Koommarkt street with tables full of people. We spotted a Stella Artois sign down the street and decided to stop in and do some internet research on our phones for a place to eat.  We were greeted by Billie, the restaurant's mascot, a French bulldog.  We found a table and sat down.  Our research told us that the place we were in (de Kafeteria) might just be a great place to eat.  They had no English menu but we used our phones to translate the specials board and just as we were getting ready to order, the server told us our table had been reserved for someone else.  She did some shifting around though and we were able to stay.  Dinner was delicious! Valentine's Day was saved! 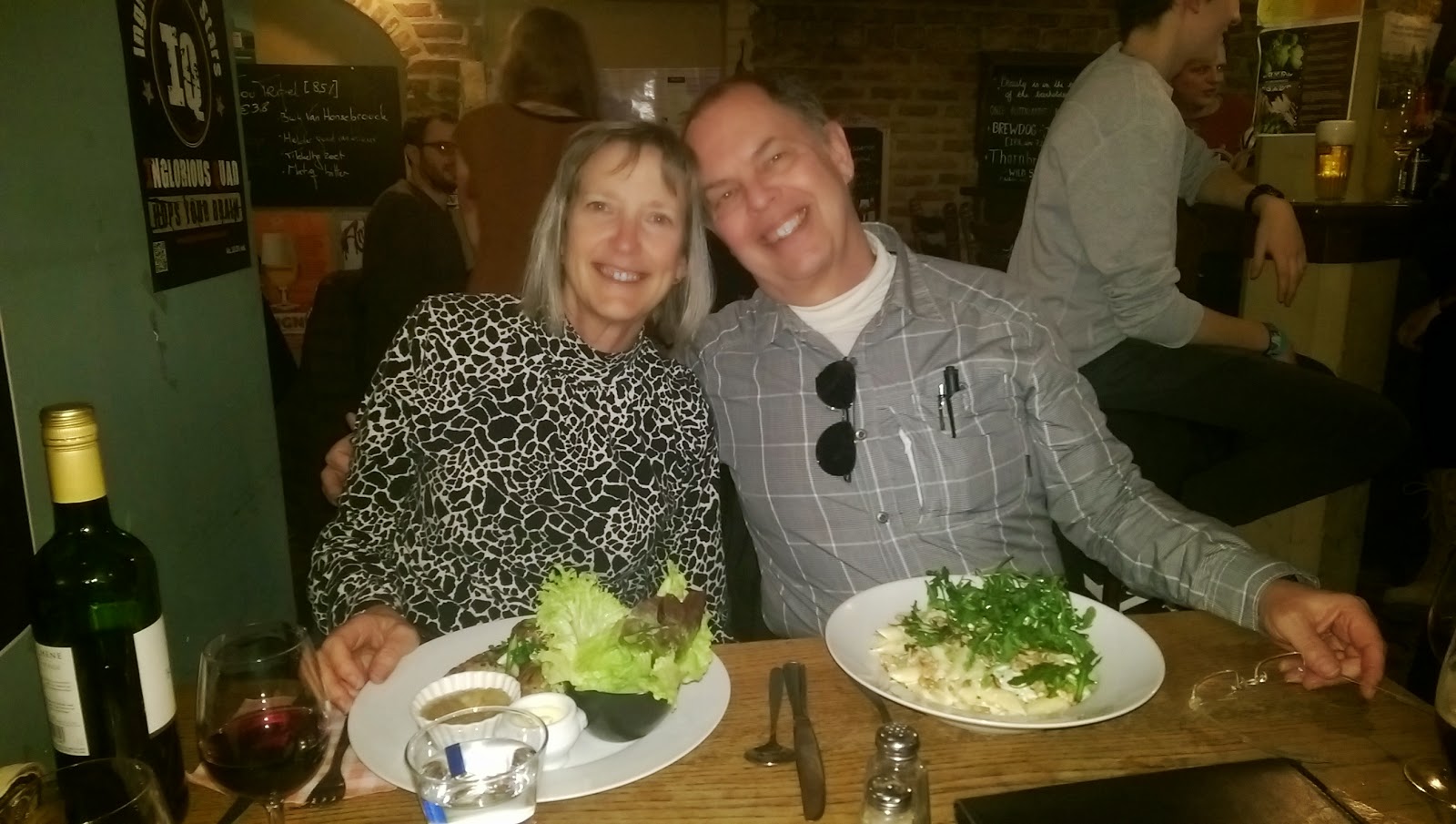 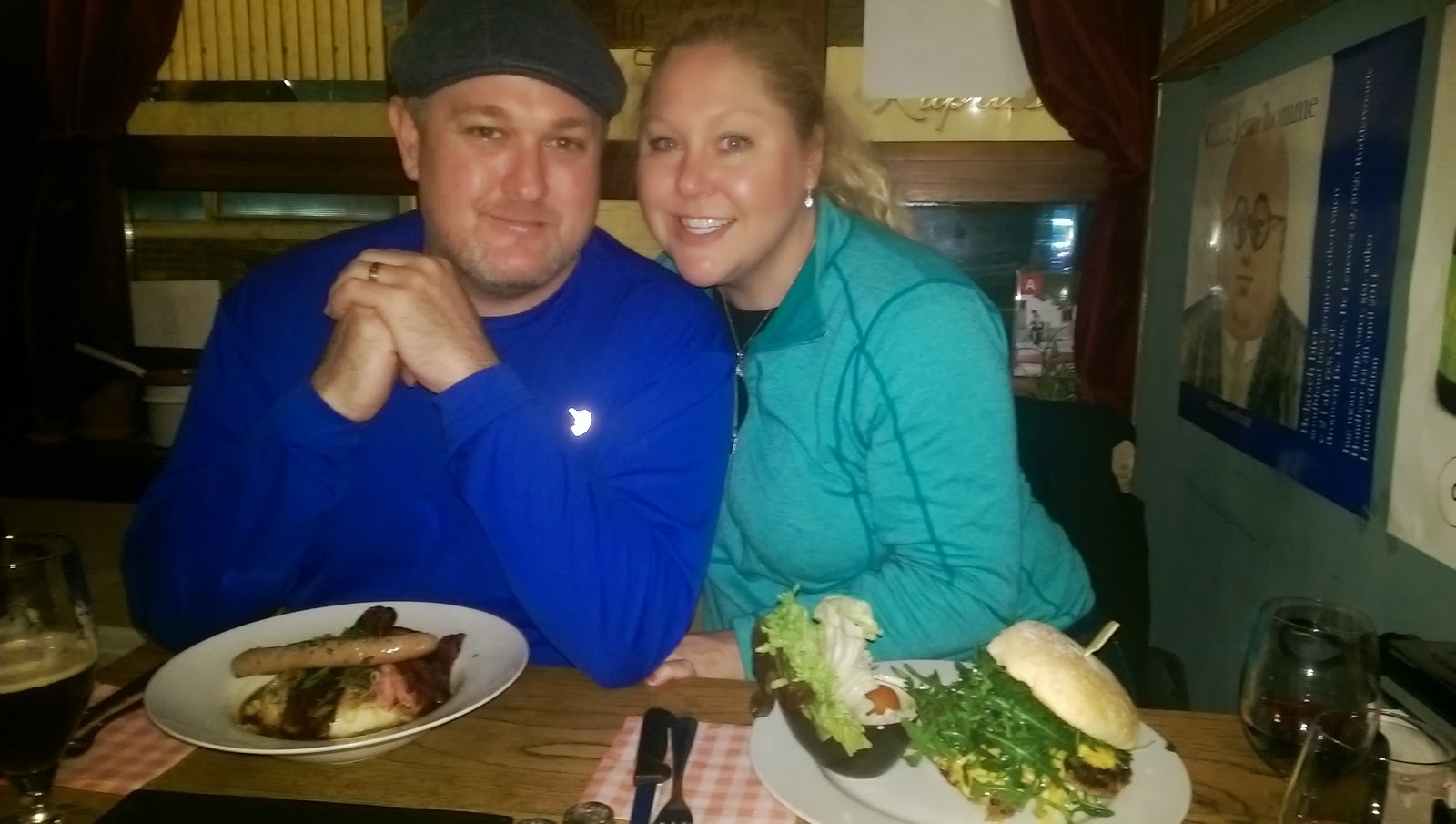 We had planned to return home on Monday, but we discovered that a winter storm in the northeast had affected flights and was expected to make it's way to Atlanta so we decided to head home on Sunday.  There was only one flight out of Brussels on Sunday and it was to New York where flights had already been cancelled so we decided to take a train to Amsterdam where we would have more options.  The 8:40AM flight to Detroit would have been our first choice but there was not a train early enough from Antwerp to get there in time, so we picked the 11AM Boston flight.  Tony and I went to bed early since we knew Sunday would be a long travel day.  Around midnight, we got a message from Chet and Amanda telling us that the Boston flight had been cancelled.  We spent about an hour researching other options. We decided to either try the 10:30AM direct flight to Atlanta or the 1PM flight to Detroit.

Sunday morning, we checked out of the hotel and got on a 6:45AM direct train to Amsterdam Airport (€121 for the 4 of us). None of our options out of Amsterdam were looking very good at this point.  Tony commented, "Wouldn't it be nice if the 8:40AM flight to Detroit were delayed?"  Lo and behold, we checked the schedule and it had been delayed until 11:15AM, giving us plenty of time to make it!  We checked in, made it though passport control and even had time for a cup of coffee in the KLM lounge before heading to the gate.

After our last fiasco with Amsterdam security, we were well prepared this time.  We had separated out all of our electric and electronic devices including hair dryers, shavers, flashlights, flash drives, extension cords and USB cords so we could easily dump everything into a bin for inspection. While we waited for our seats, the gate made an announcement asking if anyone had a charger for an HP laptop.  Our friend Chet loaned them his so another traveler could boot up his PC to show that it was in working order.

We were given business class seats!  We high-fived and boarded the plane. Four movies and 2 meals later, we were in Detroit!  We had thought we might have a chance to get home to Atlanta though Minneapolis but when we talked to an agent, she thought we had a better chance on the direct Atlanta flight.  While we were waiting at the gate, they started making the "denied boarding" announcement, meaning they were offering revenue passengers vouchers to take a later flight.  We started looking at other options. I found a connection through Dallas at 4PM that looked like a sure thing.  After a quick stop in the Sky Club, we headed for the Dallas gate.  After we boarded, we took a short delay because it was so cold (-3F) in Detroit that the water lines on the plane had frozen. The plane restrooms were stocked with wet-naps and off we went.

We used Gogo wi-fi on the plane to check the connecting flight (Did you know that you can go to any Delta web site for free on gogo?).  All of a sudden, the list of non-revs had grown to such a number that it looked like we would not get on either of the last 2 flights out!  Once we landed, we found out the reason for the change.  The 4PM flight had taken a delay and all of the standbys had been rolled to the later flights.  As suspected, we didn't get on the 6:30PM flight but the agents in the Sky Club were very encouraging about our chances on the 7:45PM flight.  They were right!  We even got to sit together and made it back to Atlanta before midnight.  We got to our house exactly 24 hours after we had gotten up in Antwerp!

We called our trip home, "The Amazing Race".  The thrill of the hunt for seats is in our blood and it was even more fun with our adventurous friends Chet & Amanda along!

To view our other travels, please visit www.bjandtony.com