I called this write-up Junk Food, because the only real meals we had on the trip were on the plane enroute to Brussels and returning from Frankfurt!

We planned for several possibilities for the 2017 Thanksgiving holidays.  Our first choice was a bicycle trip in Germany from Trier to Koblenz, but the weather looked a little chilly for biking.  Our second choice was a bicycle trip in Spain, originating in Barcelona. The weather was more conducive but we weren't as familiar with the bicycle paths in Spain. We decided to go to Barcelona anyway and just do some touristy things and skip the biking. It looked like it would be difficult to get a seat home from Barcelona so we bought train tickets in advance from Barcelona to Madrid where we could get home more easily.

We wanted to leave on Friday or Saturday but flights looked better on Sunday. The only real obstacle would be getting to New York's JFK airport to originate the trip. We studied all of our options and the best possibilities looked like either going through Richmond or Indianapolis.  Both options would have us leaving Atlanta around 8AM to get us to New York in time for a 7PM departure to Europe.

The good thing about leaving on Sunday was that it gave us an opportunity to attend our friends' amazing annual "Crack the Wheel" party where we celebrated with wine and a giant wheel of Parmesan Cheese! We had a great time at the party and made it home to meet our niece, Emma, who was planning to pet sit for not only us but our travel companions as well.  It would be an interesting few days for Emma with 2 Chihuahua mixes, a Great Pyrenees and a Savannah cat!

Shortly after we got home though, we got a text message from our travel companions saying they were canceling.  Of course we were disappointed, but we decided to go ahead and try to get to Europe without them.  Lucy, our chihuahua, was relieved that the other dogs wouldn't be coming over to stay with her.

We decided to go to the airport early and head for the Sky Club where we would decide on a route to JFK.  The new Sky Club in Concourse B is fabulous.  We found seats overlooking the concourse where we could watch the sun rise over the runway.  We had oatmeal, breakfast casserole and coffee.  We decided to take the route to JFK through Indianapolis which turned out to be a great option.  We got exit row seats to IND and had biscoffs and Fresca enroute.  There is a Sky Club in Indianapolis where we enjoyed a relaxing few hours waiting for our connection to JFK.  We had cheese grits, soup, chicken salad, and a hot dog!  While we were waiting, we decided to change our destination to Brussels.  We would take the train to Antwerp and enjoy wandering around Old Town for a couple of days.  We changed our hotel reservations and cancelled our (non-refundable) train tickets.  We should learn to never make reservations since our travel plans are always in flux.

We got first class seats from Indianapolis to JFK, a real rarity on a domestic flight!  We had a couple of hours to kill before the flight to Brussels so we went to the Sky Club in JFK.  The food selections weren't very enticing so we just had a glass of wine and some nuts.

We got great seats to Brussels and enjoyed a fabulous meal on the plane (I had the fish & Tony had the beef).  We both slept well and awoke just before landing.  It was an easy trek through the familiar Brussels terminal to the train station.  We caught an early train and made it to Antwerp before 10AM.  The Hilton Old Town upgraded us to an Alcove Suite with an amazing view. 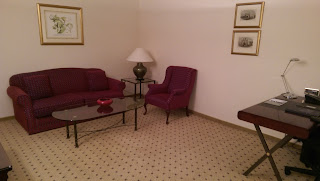 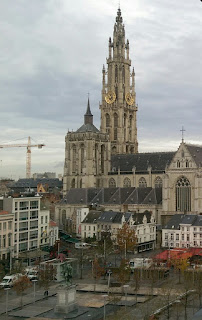 We enjoyed coffee in the Executive Lounge before heading out to explore the town.  We wanted to go to Billie's Bier Kafétaria, a favorite place from a previous trip but it didn't open until 6PM so we found De Vagant, a friendly little place at the corner of Reynertsstraat and Pelgrimstraat.  There was a black cat warming itself on the heater, so you know it is a nice warm atmosphere!  The reviews on Yelp said we should try some of the various flavors of jenever (gin from juniper berries).  We sampled the plain, rhubarb and blueberry flavors while we played a few hands of cards. 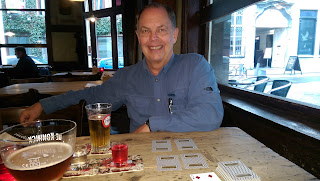 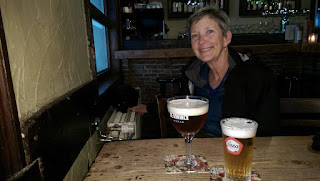 We wandered around and did some sightseeing before returning to the hotel for afternoon tea with nuts, chips and pastries.  Over snacks, we researched more Yelp suggestions for fun places to go.  We settled on K. Zeppos on Vleminckveld.  It was a friendly little place filled with locals.  We shared a soup of the day (celery) and a meat platter. 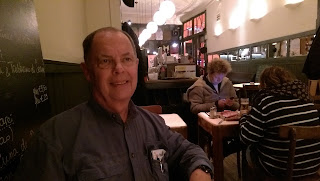 It had been a long couple of days so after a few more hands of cards at K. Zeppos, we made our way back to the hotel.  We stopped into the Executive Lounge for some wine and more snacks.  They were serving appetizers of fried shrimp and some sort of indian eggroll along with cheese, nuts and desserts.  After a few glasses of wine, we were ready for bed!

We slept through breakfast so we just had coffee in the executive lounge before setting out for more sightseeing.  We took a brief look at return flights but couldn't make a decision about when or how we would get home.

We wanted to walk to a section of town that the tourist information office at the train station had told us about that was supposed to have beautiful old homes.  Our walk took us through the diamond district so we could gawk at the hundreds of diamond pieces in the dozens of shop windows.

Near our destination, we found a cute little square with a church and a few restaurants. 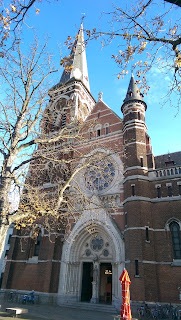 We stopped at the Aan Het Strand Van Oostende across from the church.  It was a very inviting place with heated outdoor seats and blankets!  It felt great to enjoy the sunshine and heat on such a crisp day! 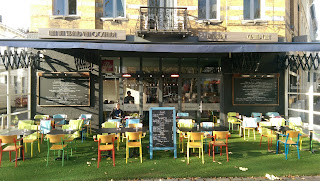 We found Cogels Osylei, the street we were looking for and gawked at the beautiful homes. 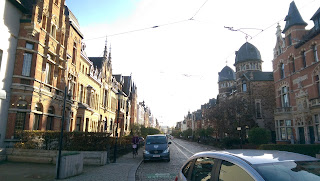 We were amazed by the brick work and details on some of the homes. 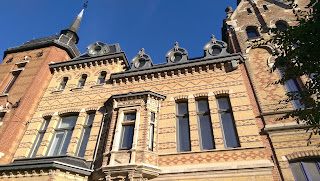 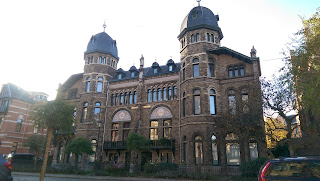 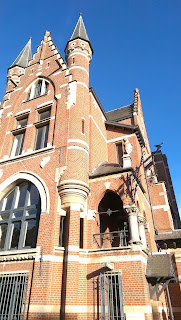 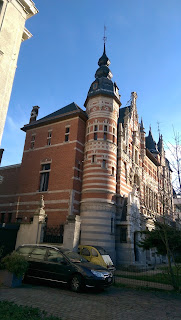 At an intersection in the center of the street, there were 4 identical houses on the corners. 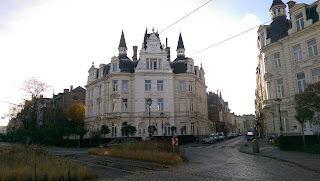 We wondered what the people do who live in these huge houses! 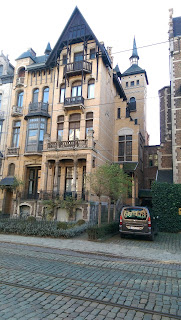 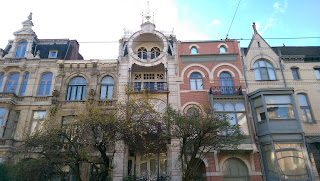 I wanted to wind our way back to Old Town via a park I had seen on the map.  We walked toward Koning Albertpark and along the way, we found De Pelgrim, a fun looking bicycle bar.  We stopped in for a bier and bitterballen (think fried gravy balls).  We chose a window seat and noticed that we were right across the street from the De Koninck brewery. 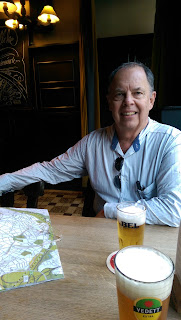 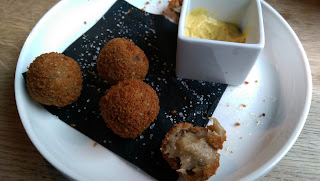 I wanted to use the restroom before moving on, but I was not sure which door to pick.  They each had a crown pictured on the  door. 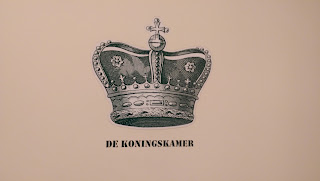 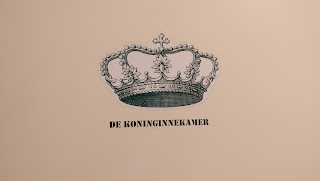 I had already accidently toured the men's room in Indianapolis on the way here so I didn't want to repeat that embarrassment.  A nice man pointed me toward the correct room.

We stopped in at the brewery but decided against the 90 minute tour since it was already getting late and we wanted to get back to "our" neighborhood. 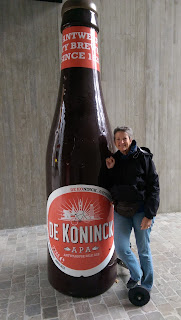 It was much easier to discern the restroom signs at the brewery since "Women are ALWAYS RIGHT!" 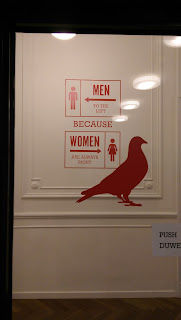 We took a circuitous route back to Old Town, passing an interesting old building in an area we had stayed on a previous trip. 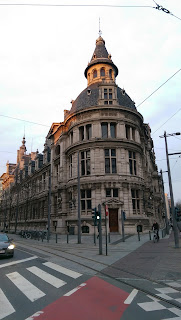 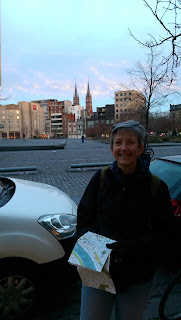 We stopped into De Vagant one more time to sample a few more jenever flavors. The chocolate-creme one tasted like Baileys.  It was good,but we decided we preferred the non-creme based ones. 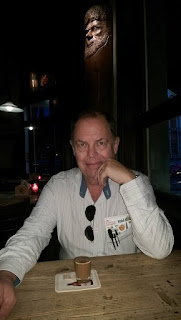 We planned to meet our friend Liesbeth at Billie's Bier Kafeteria.  We stopped into the Hilton Executive Lounge to plan our trip home the next day over a glass of wine.

We could probably get seats on the flight from Brussels to JFK but since we were going home on such a busy travel day (the Wednesday before Thanksgiving), we were afraid we wouldn't be able to get out of New York.  We decided we would go to Frankfurt the next morning to fly direct from Frankfurt to Atlanta. We tried to book stand-by seats on a Lufthansa flight from Brussels to Frankfurt the next day but the availability display showed a red frownie-face indicating it was unlikely we would get on. We later learned that there was a Lufthansa pilot's strike.  We decided on a very early train that would get us to Frankfurt in time for the Atlanta flight.

We asked Liesbeth to meet us at the hotel since we wanted to make it an early night.  The lounge was serving fried mussels and cheese wrapped in an eggroll wrapper along with olives, nuts, chips & raw veggies.  While we were visiting in the lounge, we noticed a little visitor (mouse) running across the carpet!

We said goodbye to Liesbeth and headed off to bed for a short night.  We got up, packed and took the 15 minute walk to get to the train station in time for our 6AM train to Frankfurt.  We had one connection at Brussels Nord and then got a seat in the dining car on the fast train to Frankfurt. We got Cappuccino and shared a ham & cheese baguette. 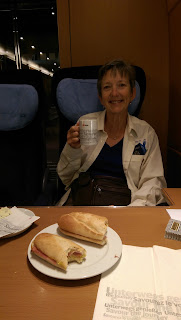 We played cards when we finished eating.  A couple of German business travelers shared our table and we explained the rules of the game Casino to them.

We made it to the Frankfurt airport in plenty of time for our flight and got great seats in Delta One!  We had a retiring pilot on our flight.  The other pilot made a little speech recognizing his last flight and we all applauded.

We had two delicious meals, watched a few movies, napped for awhile and we were home.  Delta sometimes recognizes a retiring pilot's last flight by spraying the plane with water.  We were excited to be part of this celebration when we landed.

We were glad to be home in time for Thanksgiving.  We had a non-traditional meal of Lasagna made with ground turkey!

Hope everyone had a great Thanksgiving!  We are thankful for so many things in our lives: Family, Friends, Pets, Home, etc...  and FLIGHT BENEFITS!!!
Posted by BJ at 1:28 PM