Our friend Maria bought a condo in San Juan, planned to visit it in July, and invited us to come along.  Flights looked good for us to travel Wednesday, July 14 and return on Saturday, July 17.  Maria let us know in advance that the Air Conditioner in the condo had not been installed yet, but this did not deter us! We were sure those tropical breezes would keep us cool.

On travel day, Maria got word to us that she had left her cell phone at home in Colorado so the only way to get in touch with her to let her know when we would arrive was through one of her friends in Puerto Rico.

The Atlanta to San Juan flights looked pretty full so we decided to go through New York instead.  We arrived at the Jacksonville airport in plenty of time for breakfast at the Sky Club before our 6AM JFK flight.  As we approached the gate, we heard the agent offering $200 for anyone willing to give up their seat.  This is never a good sign for a non-rev!  Every few minutes, the offer went up until she finally got a passenger willing to take $800 for denied boarding compensation.  Still we waited around, hoping that the early flight hour would mean there would be some no-shows who had overslept.  No such luck.

We returned to the Sky Club to review our options.  By now, the bar was open. 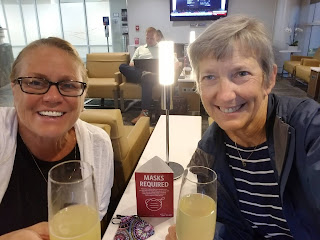 We decided to try going through Atlanta because it would give us 3 opportunities to stand by for flights to San Juan.  We got on the 7 AM Jacksonville to Atlanta flight with no problem.  We headed for Concourse E and had time to stop into the Sky Club before going to the gate. 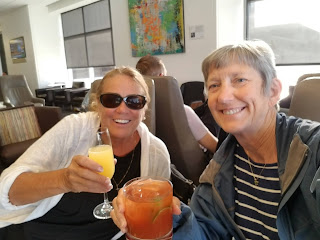 The 9:45AM San Juan flight had our hearts fluttering as they called each name ahead of ours on the standby list.  We were next in line when the agent declared the flight full.  Back to the Sky Club... 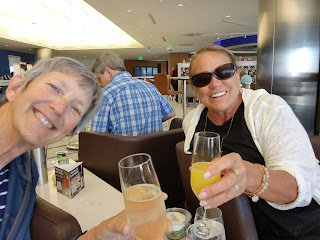 The next stand-by opportunity at 12:45PM was very disappointing.  The flight went out full and we never stood a chance.  I called Maria's friend to let her know the situation but she spoke very little English and my Spanish was not sufficient to get a message across.  As we were assessing our options (the next flight being more than 7 hours later wouldn't get us into San Juan until 11:30PM and looked no better than the last one), Maria called.  Together we decided that this trip was not meant to be and we should try to visit another time. 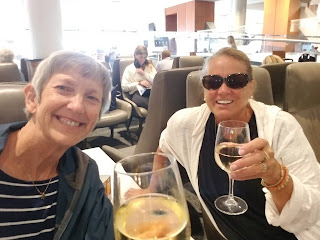 We got on the flight to New Orleans without a problem.  The time change even gave us an extra hour to enjoy the city.  Tony had booked us a room at the Doubletree on Canal Street at the edge of the French Quarter.  We caught an Uber to the hotel and got checked in.

The concierge at the hotel recommended that we stroll down Royal Street to see the art and antiques.  Our first stop was at the Monteleone Hotel's famous Carousel Bar.  We got seats at the bar and enjoyed listening to Jazz and spinning around! 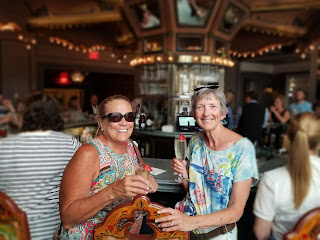 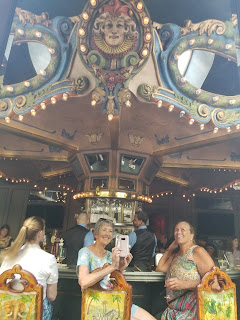 Parker, the bartender, made us a special drink for my birthday month.  It was a deliciously refreshing Fleur de Lis made with vodka instead of gin. 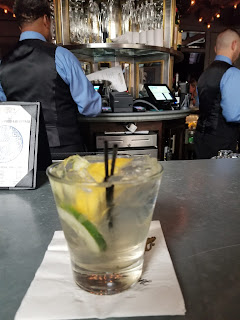 After several rotations on the carousel, we decided it was time for dinner.  The concierge had recommended Justine so we decided to try it.  We got seated at the bar, but after we looked at the menu, we decided that none of the selections were what we were hungry for. 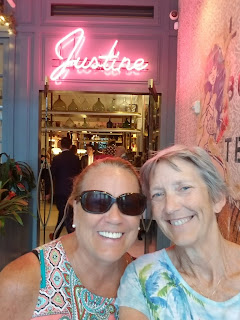 We started around the corner to another restaurant when we spied the quaint little Green Goddess restaurant with outdoor seating.  We had a look at the menu and decided to give it a try.  The food was delicious.  We tried the mushroom pate, wedge salad, meatloaf and duck pasta. The waitstaff were lots of fun.  One took our picture while the other one photobombed us! 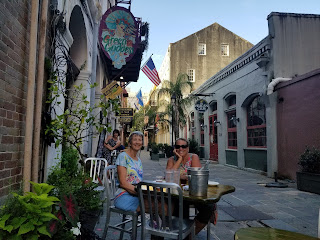 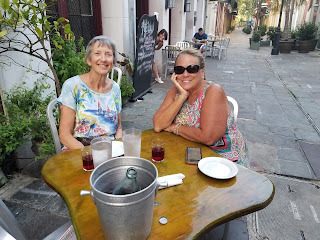 We were quite tired after our LONG day, so we went back to the hotel and fell into bed.  I woke up early the next day ready for a walk.  Terri wanted to sleep in.  I walked almost every street in the quarter being careful not to trip over the folks who were sleeping on the sidewalks.  Here's my Google Maps Route. 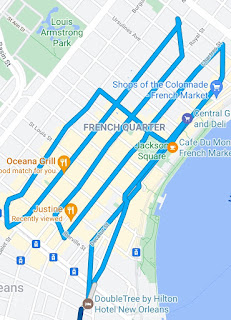 I walked 5 miles before turning back to Cafe Du Monde for a cup of Cafe Au Lait.  I listened to the band outside the cafe while waiting until 9AM when Central Grocery would open. 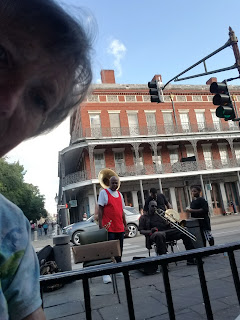 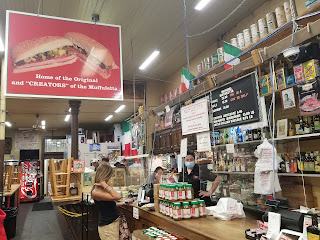 The Sky Club at the New Orleans airport was serving mufflettas and gumbo! 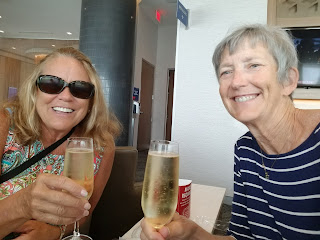 I went to the bar to get us some drinks.  The bartender introduced me to Louis, another passenger who was keeping him company at the bar.  Louis said his flight was delayed 5 hours.  I started checking our flight and suddenly there were A LOT of revenue stand-bys.  Turns out that Louis' flight was the 7AM flight to Atlanta that had taken a mechanical delay and was now scheduled to take off at noon with over 80 empty seats.  Terri and I hurried to the gate for the 7AM (Noon) flight and asked the gate agent if we could switch to that flight.  She kindly relisted us on that flight and we were boarded, but before we could take off, the captain announced a weather delay.  The agents brought Chick-Fil-A sandwiches for everyone on the plane while we waited.  While we were waiting, the Captain announced that there was another mechanical issue so we would be delayed again!

We finally took off at 1:56PM with an extremely slim chance to make our connection to Jacksonville.  We landed at 4:00PM and taxied to gate A3.  We hurried to our connecting gate (T3) for the 4:20PM flight, but they were closing the door as we approached the gate.  The next flight to Jacksonville would go out of gate A3 where we had just come from!  Thankfully there was a Sky Club on the way where we could rest after our run between concourses. 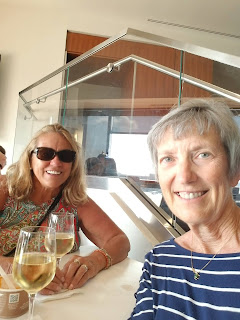 We utilized our time to try a craft idea we saw online.  We didn't have all of the right supplies, and the plastic knife made it a bit challenging but it was fun to make.  We got so involved in our crafting that we almost forgot to go to the gate for the next flight. 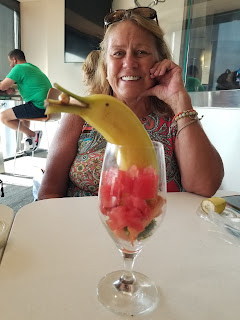 We made it back to Fernandina Beach, happy that we had such fun but sad that we didn't get to see our friend Maria.