A little back-story:  We have hosted several young German interns who needed accomodations in the Atlanta area over the past decade.  This particular couple, Tim and Vivi, Tony liked to call a mated pair.  The company where they would be interning, Messe Frankfurt, contacted us to see if we would host them.  We agreed, but then Tim and Vivi found an AirBNB that would give them their own space so they made other arrangements.  It turned out that the AirBNB arrangement was a scam so with no place to go, they became our next German children.  We bonded over the several months (2016) that they were with us and were sad when it was time for them to go back home. 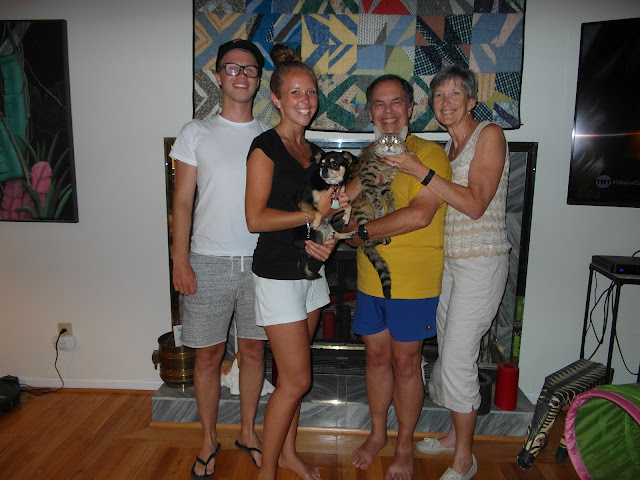 We were thrilled when they video called us with their engagement news and very pleased to be invited to their wedding.
This would be our first international trip since the COVID epidemic and we weren't sure how we would navigate the requirements for travel. To relieve some of the stress, we decided to use frequent flyer points for the trip over. We secured Delta One seats from Atlanta to Hamburg, connecting in Manchester and then Amsterdam on KLM.
A few days before the trip, Tony noticed that our itinerary had changed with no notice to us. The itinerary now had us flying Atlanta to London Heathrow and then 20 minutes later flying from Manchester to Amsterdam and on to Hamburg. Of course there was no way that we could make a connecton from London to Manchester in 20 minutes so he spent several hours on the phone trying to resolve the situation. We were able to get a direct flight to Amsterdam with a very long layover before our connection to Hamburg. This would simplify our research on entry requirements since we would no longer be transiting the United Kingdom.
The next hurdle to overcome was to figure out what paperwork we needed to travel. We had our COVID vaccine card but it was just a paper copy so we weren't sure if it would be sufficient. We went to the health department but all they were able to provide was another paper copy of the vaccine card. Thankfully this turned out to be okay.
On the day of travel, we stood by for the 2PM JAX-ATL flight and got on with no problem, giving us time to enjoy the Sky Club before our 8PM departure to Amsterdam. There was a line at the gate and people seemed to have paperwork with them so we got out our computer and scanned for anything we had overlooked. We found a form that looked likely so we filled it out and saved it as a PDF on our tablet since we had no way to print it at the gate. When we got to the front of the line, they verified our passport and vaccine card and gave us a paper to fill out, instructing us to keep it with us.
It felt a bit strange, knowing we had confirmed seats on the flight. We boarded when they called for Delta One passengers instead of waiting nervously to hear our names called. 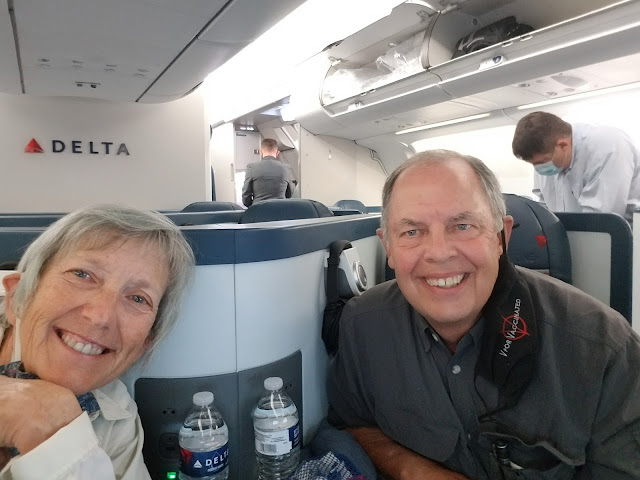 Delta One meal service had changed a lot since we last flew. Champagne before take off was served in a plastic cup and there were no warm nuts. Everything was brought on a single tray rather than separate courses and there were only 2 wine choices. With confirmed seats, we had been able to pre-select our meals. I had the crab cakes. Tony had the pasta. 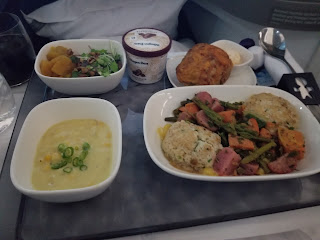 Wearing our masks on the long flight was not as bad as I had feared. It was kind of nice having everything on one tray so the meal service was much faster and we were able to get more sleep. Neither of us had the breakfast. We landed in Amsterdam around 10AM local time and made our way to the KLM Club. Our connection was not until 4:45PM so we had some time to kill. We ate, drank, played cards and read our books. The KLM Club had a nice mural on the wall so we were able to pretend we were out on the town. 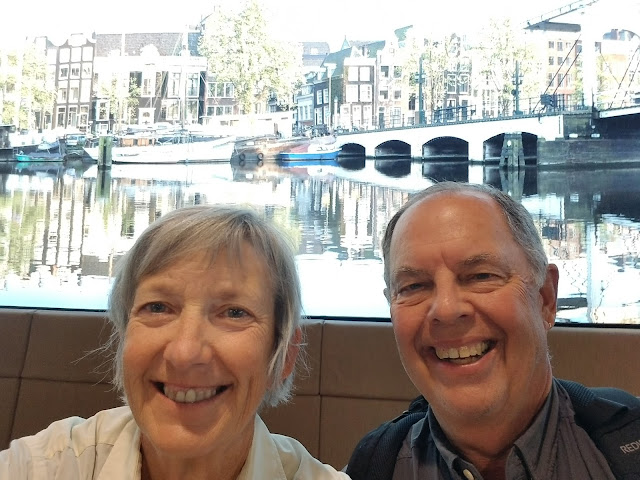 It was soon time to head to the gate. First class on KLM was a bit cramped as first class seats go, but it was a short flight and they served wine! 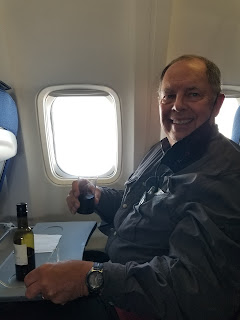 We landed at 6PM in Hamburg and Tim (the groom) picked us up at the airport. We assured him that we could make our way to the hotel, knowing that he would be busy on the night before his wedding but he insisted. He dropped us at our hotel and went off to do his groomly duties getting the venue set up for the big event the next day. We checked into the hotel and went off to see Hamburg at night. 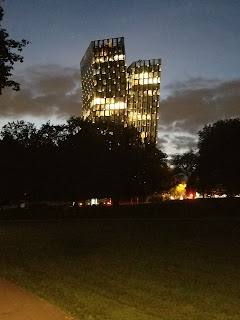 We were pretty tired after traveling all night so it was a short tour. We mostly wanted to locate the Landungsbrücken train station so we could find it for our return trip. We spotted it and then found a place for a beer and a bite before heading off to bed. 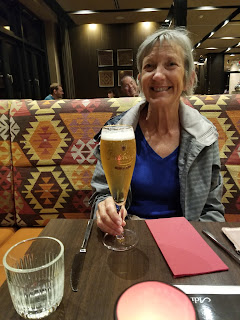 We woke up shortly before noon and set off to find a place where we could take a COVID-19 test for our return trip to the United States. We found a testing facility not far from the hotel.

The test required a German phone number to get the results. We gave them Tim's phone number. They sent him the results and he texted us a screen shot. We could not read any of it but were told that it was negative.
Next was coffee at the Monopol for BJ and a beer for Tony. 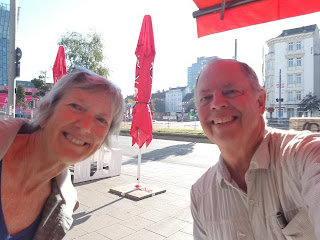 Afterward, we headed back to the hotel to shower and get ready for the wedding. We were to take a bus to the venue with the rest of the wedding party at 2:30PM. The wedding would be held at the Landhaus Westerhof about 30 minutes from the hotel. Return busses had been arranged at 2:00AM, 3:00AM and 4:00AM. This promised to be quite a party! We found the rest of the group waiting for the bus in front of the hotel and enjoyed a local beer before the trip. 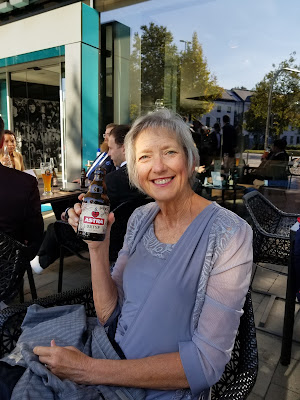 The bus driver got a little lost on the way but eventually got us to the wedding. 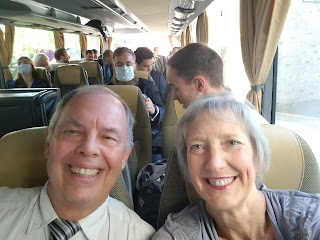 When we arrived, we were ushered inside to show our proof of vaccination and then we milled around until the ceremony started at 4:00PM. 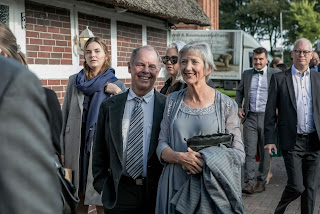 The service was lovely but we couldn't understand any of it. We were told that we, the American parents, were mentioned in the ceremony. 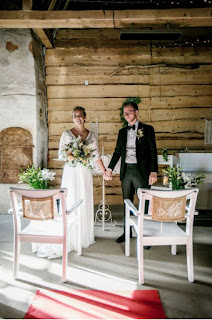 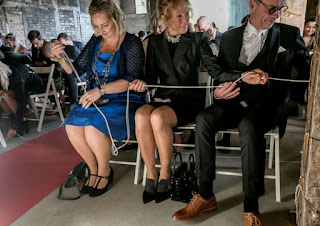 This took longer than they anticipated and they had to play the songs through twice before the rings made it back. After the ceremony we went to the garden where we had champagne. 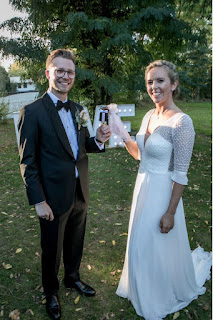 We stood in line to congratulate the couple and after a few minutes were directed back into the dining room. 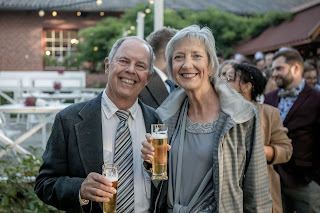 We were surprised and delighted to be seated at the head table with the bride and groom! 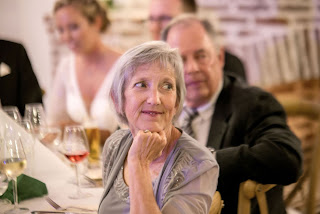 Everyone was so nice and welcoming to us! Each table danced their way to the buffet when their song was played. We had a wonderful meal! 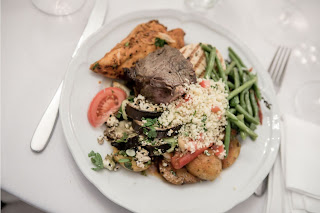 Afterward, there was the first dance, the cutting of the cake and then the lights went down and the party heated up! Even Tony got up and danced! 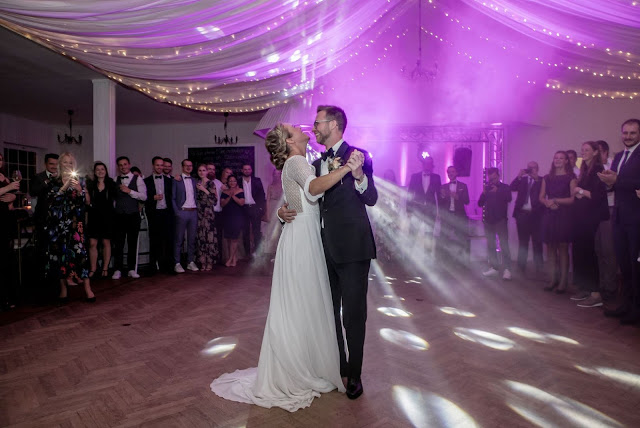 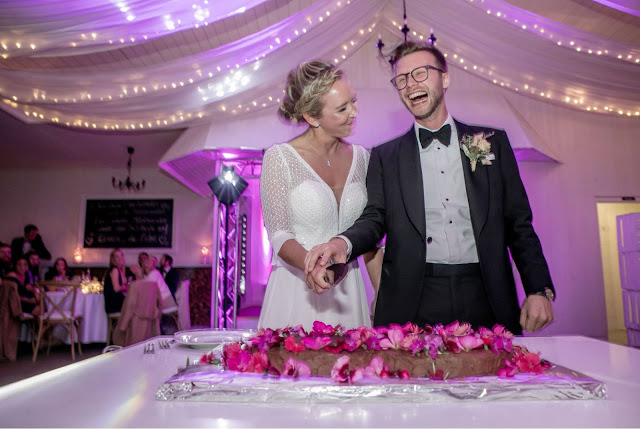 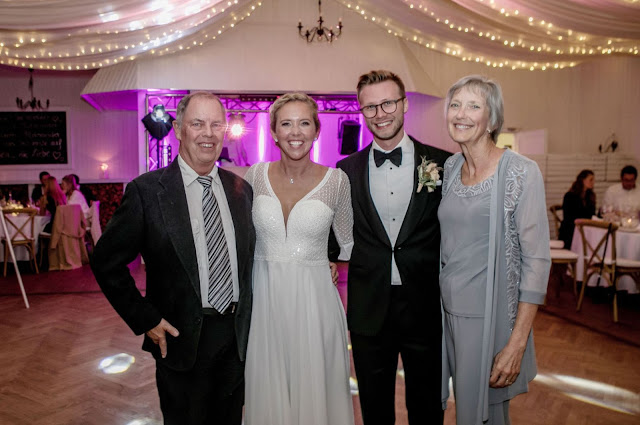 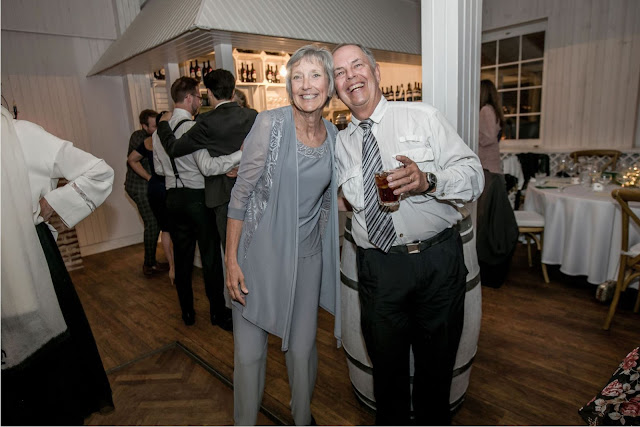 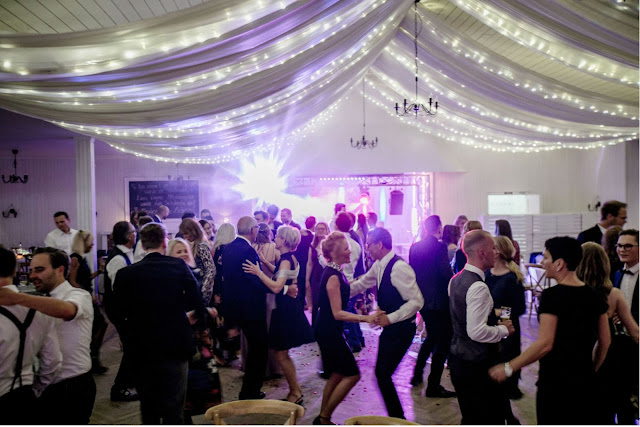 We had thought we would take a taxi back to the hotel before the 2:00AM bus, but ended up catching a ride with Tim's grandmother and friend around 1:00AM.
We napped for an hour from 2AM-3AM then checked out of the hotel and walked to the Landungsbrücken train station. We had a bit of a challenge figuring out the ticket machine, trying each of our credit cards and finally getting our debit card to work. We caught the 4:15AM train and were shocked at how crowded it was. It was standing room only!
The airport was very crowded as well. Thankfully we had allowed ourselves plenty of time to get through security. We were traveling stand-by on the way home so we were pleased to see on the KLM app that we had been given seats on the 1 hour flight to Amsterdam.
We had four hours until our Amsterdam to Boston flight. We tried to check in at a kiosk but were directed to see an agent. We found the Customer Care center and took a number. The wait seemed interminable but we had plenty of time (or so we thought). When we finally got to the desk, the agent wanted to see our COVID-19 test results. We showed her the text message screen shot but she said it was not acceptable and she needed the actual message that she could click on to see the results.
We went to the COVID-19 test office in the airport and saw the 90€ price for a test. We elected to try the proctored tests we had brought with us instead. This had to be done using wi-fi and face-timing with an agent for 15 minutes. The agent watched us perform the test and then had to be able to see our face and the test on the screen for 15 minutes to make sure we didn't tamper with the test. I had to fumble with the charger for my phone during the 15 minutes to make sure my battery didn't go dead without jostling the phone away from me or the test. It was pretty nerve-wracking.
We finally got our results and headed back to the Customer Service desk. We took a number and waited for about 15 minutes before we gave up and went to the gate or else we would have missed the flight.
We were thrilled to be seated in Delta One, had a nice lunch and a long nap before landing in Boston. 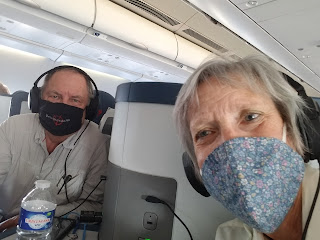 We cleared customs and hurried to the gate to stand by for the 2:15PM Jacksonville flight. We thought we might have a chance since there were a couple of no-shows but they came running up at the last minute. We found a 3:00PM flight from Boston to Richmond that would connect with a flight to Atlanta and still allow us to stand by for a flight to Jacksonville and get home before midnight! It all came together and we were able to pick Lucy up at our friend's house and fall into bed to recover.
It was a wonderful wedding and we wouldn't have missed it for the world, but we HOPE that our next trip is more relaxing! :)
Posted by BJ at 1:03 PM